HOW IS LAPAROSCOPIC HELLER MYOTOMY PERFORMED?

During the procedure, you is put under general anesthesia. Five or six small incisions are made in the abdominal wall and laparoscopic instruments are inserted. The myotomy is a lengthwise cut along the esophagus, starting above the LES and extending down onto the stomach a little way. The esophagus is made of several layers, and the myotomy only cuts through the outside muscle layers which are squeezing it shut, leaving the inner muscosal layer intact. 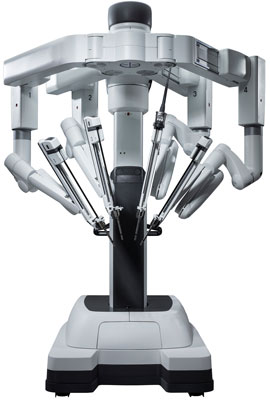 Robotic Heller Myotomy is performed using the da Vinci Surgical System, a state-of-the-art surgical platform. By overcoming the limits of both traditional open and laparoscopic surgery, da Vinci is changing the experience of surgery for people around the world.

There is a small risk of perforation during the myotomy. A gastrografin swallow is performed after the surgery to check for leaks. If Dr. Khosravi accidentally cuts through the innermost layer of the esophagus, the perforation may need to be closed with a stitch.

Food can easily pass downward after the myotomy has cut through the lower esophageal sphincter, but stomach acids can also easily reflux upward. Therefore, this surgery is often combined with partial fundoplication to reduce the incidence of postoperative acid reflux.

After laparoscopic surgery, most patients can take clear liquids later the same day, start a soft diet within 2–3 days, and return to a normal diet after one month. The typical hospital stay is 2–3 days, and many patients can return to work after two weeks. If the surgery is done open instead of laparoscopically, patients may need to take a month off work. Heavy lifting is typically restricted for six weeks or more.

The Heller myotomy is a long-term treatment, and many patients do not require any further treatment. However, some will eventually need pneumatic dilation, repeat myotomy (usually performed as an open procedure the second time around), or esophagectomy. It is important to monitor changes in the shape and function of the esophagus with an annual timed barium swallow. Regular endoscopy may also be useful to monitor changes in the tissue of the esophagus, since reflux may damage the esophagus over time, potentially causing the return of dysphagia, or a premalignant condition known as Barrett’s esophagus.

Though this surgery does not correct the underlying cause and does not completely eliminate achalasia symptoms, the vast majority of patients find that the surgery greatly improves their ability to eat and drink. It is considered the definitive treatment for achalasia.