Hiatal hernia repair is surgery to repair a bulging of stomach tissue through the muscle between the abdomen and chest (diaphragm) into the chest (hiatal hernia). 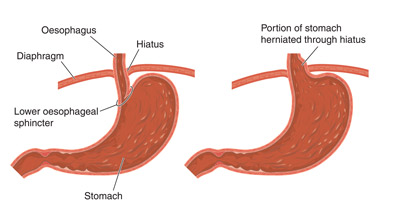 WHAT IS A HIATAL HERNIA?

When the opening (hiatus) in the muscle between the abdomen and chest (diaphragm) is too large, some of the stomach can slip up into the chest cavity. This can cause heartburn (gastro-esophageal reflux: GER) as gastric acid backflows from the stomach into the esophagus.

WHEN IS HIATAL HERNIA REPAIR NECESSARY?

Hiatal hernia repair may be recommended when you has:

HOW IS HIATAL HERNIA REPAIR PERFORMED?

While you is deep asleep and pain-free (general anesthesia), an incision is made in the abdomen. The stomach and lower esophagus are placed back into the abdominal cavity. The opening in the diaphragm (hiatus) is tightened and the stomach is stitched in position to prevent reflux. The upper part of the stomach (fundus) may be wrapped around the esophagus (fundoplication) to reduce reflux.

Patients may need to spend 3 to 10 days in the hospital after surgery. A tube will be placed into the stomach through the nose and throat (nasogastric tube) during surgery and may remain for a few days. Small, frequent feedings are recommended.